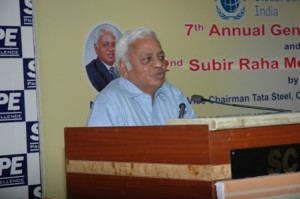 Mr. Muthuraman holds degrees in Bachelor of Technology in Metallurgical Engineering from IIT, Madras and a Masters of Business Administration from XLRI, Jamshedpur. He has also completed the Advanced Management Programme at European Centre for Executive Development, France and has undergone the Leadership Programme at INSEAD, France. Mr Muthu-raman was recently bestowed an Honorary Degree of Doctor of Humane Letters, Honoris Causa from Loyola University, Chica-go.

Mr Muthuraman joined the Company in 1966 and has held various positions at the Company including Vice President (Marketing & Sales) & Vice President (Cold Rolling Mill Projects). He was appointed as Executive Director in 2000, Managing Director of the Company in 2001 and non-Executive Vice chairman in 2009. He is the Chairman of Tata International Limited on the Boards of several companies which include, Bosch Limited, Tata Industries and Strategic Energy Technology Systems Pvt. Ltd. Mr. Muthuraman is currently the President of Confederation of Indian Industry. He is also the Chairman of the Board of Governors National Institute of Technology (NIT), Jamshedpur. Mr. Muthuraman is also a member of the Business Advisory Council of Economic and Social Commission for Asia and the Pacific (ESCAP).

Mr. Muthuraman received the Distinguished Alumnus Award from IIT Madras in 1997 and the Tata Gold Medal from the Indian Institute of Metals in 2002. He also received the “CEO of the Year Award” from Business Standard in 2005, “CEO with HR Orientation Award” from World HRD Congress in 2005, Economic Times Award for Corporate Excellence in 2008 and IIM JRD Tata Award conferred by Indian Institute of Metals.

A longtime friend of Mr. Raha, he recalled his association with Mr. Raha and his contributions as the CMD ONGC.

Through his lecture Mr. Muthuraman addressed the issue of corporate governance and the social responsibility of the companies towards the community.