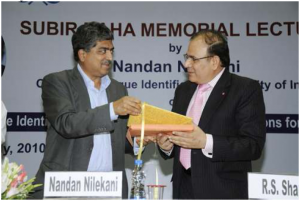 Nandan Nilekani is currently the Chairman of the Unique Identification Authority of India (UIDAI) in rank of Union Cabinet Minister, which aims to provide a unique identification number of India. Nandan Nilekani was most recently the Co- Chairman of the Board of Directors of Infosys Technologies Limited, which he co-founded in 1981. He was serving as Director on the Company’s Board since its inception to July 2009. He has held various posts at Infosys, including Chief Executive Officer and Managing Director, President, and Chief Operating Officer.

Nandan Nilekani co-founded India’s National Association of Software and Service Companies (NASSCOM) as well as the Bangalore chapter of the IndUS Entrepreneurs (TiE). He is a member of the Board of Governors of the Indian Council for Research on International Economic Relations (ICRIER) and the President of NCEAR (the premier, independent, applied economic research Institute in India).

In 2006, he was awarded one of India’s highest civilian honours, the Padma Bhushan and was also named Businessman of the Year by Forbes Asia. Times magazine listed him as one of the 100 most influential people in the world in 2006 and 2009. He is the author of ‘Imagining India’ which was one of the finalists for the FT-Goldman Sachs Book Award for the year 2009.

Recalling Mr Subir Raha’s contribution to ONGC and the Indian oil industry, Mr Sharma said that Global Compact Initiative in India was started by Mr. Raha in 2003. Under his leadership ONGC was the first company to sign the integrity pact with Transparency International. Mr. Nilekani chose to speak on transparency in the Unique Identification Project, a subject very dear to Mr. Raha.

Recounting his experiences and lessons learnt in Unique Identification project, Mr Nilekani said that if we want inclusive growth and want people to participate in economic development we must come out with a solution to provide identity to the residents of this country. Establishing identity would automatically open doors for other services to reach out to the needy. This identity document would be a foundation for other services to build upon. ‘Aadhar’, the name given to the project means just that- the foundation.